Now with the Cretan Craft safely back in Devon, I will attempt to recreate a little bit of Crete in my front room.  With the heating turned up to the max and some sea shells sprawled about the place, it’s time I retrieve the beers from the fridge.

With bold and simple labels the beers stand out.  Don’t worry if you don’t understand Greek either, you are given the style of each beer in English, along with abv, IBU and other instructions. 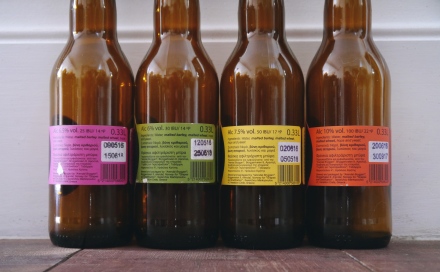 One thing I had noticed is that these beers are not among the freshest of the fresh.  The Greek appear to seem happier that their hoppy beers are carrying a little age as opposed to the super fresh juice we seem to crave.  Kjetil Jikiun, Solos head brewer, also tells me that the Latvians seem to prefer their hoppy beers to be presented in the same way too.

When Solo started brewing, and their current beers are contract brewed, although this will change in the near future as Solo are intending on setting up their own brewery, they were met with some resistance, as apparently their beers weren’t what the market required.  Although Solo appear to have had the last laugh as the Saison is one of their best selling beers.

Solo were responsible for bringing the first true IPA to the Greek market, which is also selling well.  As is their Imperial IPA, which again, they were told that nobody in Greece would want a 10% beer.  However, they seem to have proved their doubters wrong yet again.

Ok, so there are no shells, I just have the branded glass I was awarded in Heraklion, but it is time to crack them open.

If ever there was a time that a banana could be a tart, this is it.  Its rich and sharp, and its voluptuous head dominates the pour, with notes of banana billowing out.  Delve in through an almost wooded area, it’s incredibly dry, and you’re dropped right off in the middle of a cereal field.  It ends as a dry, and beautiful, classic saison.

Straight away you can tell the hops have faded somewhat and the overwhelming maltiness is just beginning to creep in. Nevertheless, the Chinook still stands proud and the malts begin to level out into some breaded glory.  It is a straight up, no nonsense US style pale, with a body as smooth as freshly laid tarmacadam.  It’s not overly bitter and it still retains its balance.  I really like it.

Slightly hop faded, the IPA approaches.  Apart from the step up in abv, taste wise, not a huge amount separates this from the pale.  Personally I don’t think its bitter enough; it claims to hold 50 IBU, whereas the Pale stands at 30, but it just doesn’t appear to come across with an increased bitterness.  It finishes fairly sweet too, and the Cascade lingers as a fruity fizzy sherbet.  It also has something savoury going on, not quite in the same way that Mosaic does, but pleasing.  Unfortunately though, I do feel it’s somewhat past its best; it had been in the bottle for about twelve months and I would have loved to have been able to try a slightly fresher one.  But then, this is exactly how the Greeks prefer their hoppy beers to be, so who am I to complain?

Boy does this thing have presence, it’s in your face, but not boorish.  It’s complete and balanced.  The lack of freshness really isn’t a problem either and you remain tucked in.  The faded hops have been overtaken by the malts and it offers just a tickle of booze.  The sweet malts are at the forefront, but going deeper there is an overwhelming orangey pithy bitterness, and you get that same sherbet feeling from the Cascade as you do with the IPA.  I love this, it’s bone dry, smooth as silk and incredibly bitter.  I’d almost forgotten what it was like to taste an intensely bitter beer, and this has brought it all home again.  I don’t actually care that its hops have faded, the bitterness of this thing is incredible.  I want more.

Trying to remain true to style, these Solo beers come across well and do meet all the requirements.  But I have to admit, I was looking for a bit of a Greek twist.  I did find it too, and it is that they are intended to be consumed after they have aged a little.  Although I do wonder whether this is due to a lack of understanding or just flavour preference.

Either way, this goes completely against everything we have become used to in the last couple of years, with the whole drink it within a week or die procedure.  But if this is what it takes to get the Greek into craft, then go for it.